The Razer Blade 15 Advanced is a great workstation, especially if you plan to use with Linux. This review focuses on how the Razer Blade performs with Linux and how to configure Optimus and Co. to work flawless with Arch Linux.

Note: This is an ongoing review and it's going to be updated from time to time with new observations, benchmarks etc. (2020/03/01)

I got the "entry" version of the Advanced Model of the Razer Blade 15 with the RTX 2070 Max-Q and upgraded the memory and SSD myself. This is straightforward, just remove 10 screws on the bottom with an Torx T5 screwdriver. There are no clips etc. holding it in place, just a magnet in the middle holding it slightly. 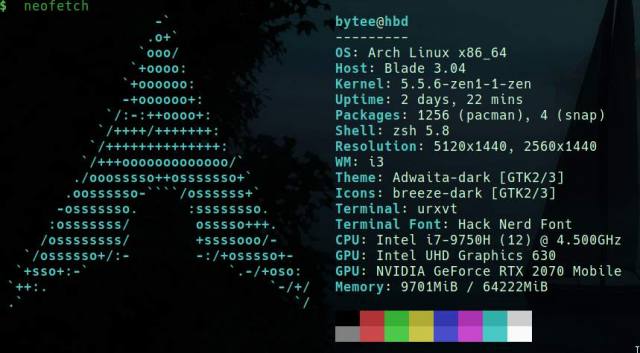 The Arch Linux installation is straightforward for the Razer Blade 15. Just disable Secure Boot in the Bios (Del Key) before installing and boot in UEFI mode.

The AX200 wifi card is working out of the box with recent kernel versions (> 5.1) and the hardware is detected without any issues on Arch Linux. All devices are working, including the integrated webcam (IMC Networks - Azurewave) and the Thunderbolt 3 Controller.

The ElanTech touchpad (ELAN0406:00 04F3:30A6) and the Razer Keyboard (with RGB control per key) works out of the box and without issues too. OpenRazer keyboard control with RazerGenie is working great. Razers effort providing an Open Source Linux solution for that was one of the reasons I picked the Notebook (Kudos!). 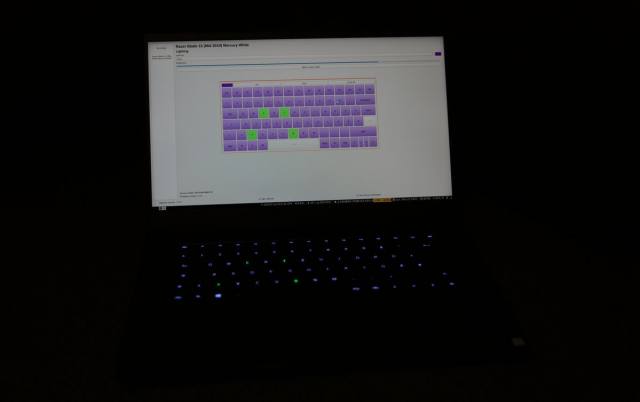 The 240 Hz display is automatically detected and works flawless, no need to play around xrandr. I am using the Linux Zen Kernel (pacman -S linux-zen), as it makes the desktop experience "snappier". For the Nvidia GPU / Optimus configuration see the section below.

The Linux performance of the Razer Blade 15 is great, even better then on windows so far. The out of the box CPU undervolting (-100 mV) by Razer is helping keeping it cool and stable also on higher turbo-boosts. CPU performance is great so far, temperatures are low and during day to day usage it's almost silent. Phoronix Test Suite benchmarks are going to follow.

The Intel UHD 630 GPU is doing fine, which is not a real surprise for a Full HD only display, even with 240 Hz. With an 4k display (like the OLED one the Gigabyte Aorus, which I also tested), the UHD 630 would reach its limits, for example when scrolling in a browser.

When you want to use the external display connections, you need to switch to the Nvidia GPU. Thanks to the optimus-manger this is way easier in Arch Linux nowadays than before. (See Nvidia Optimus below). Performance-wise the RTX 2070 Max-Q is doing fine with the proprietary Nvidia Driver (440 Version). Just did some basic testing with glxgears, which were fine. Going to add some Unigine benchmarks later.

GPU switching works great with optimus-manager and the proprietary Nvidia driver. As i am using the Linux Zen Kernel, so I am using the dkms version. It makes switching between and hybrid approach (the Nvidia driver turns the card off itself) and the Nvidia RTX 2070 easier and allows saving power when on battery only. The proprietary Nvidia driver offers an integrated power management solution (still marked as experimental) for saving power, which makes using bbswitch obsolete and allows staying in hybird mode, instead of going Intel GPU only.

There are three power saving options available in the Linux Nvidia driver:

See this guide for an extended explanation. As you need to restart your Xorg server anyways to switch between the Intel and Nvidia GPU, you can just use the most "advanced" mode 0x02.

Once set you need to reboot.

Switching between the Intel and Nvidia GPU using optimus manager is straight forward:

Please note this is going to kill your current Xorg session.

Without heavy use and on the lowest Nvidia power state (0x02 see Nvidia Optimus) powertop (no optimizations) is showing a discharge rate of 9 to 12 W, which is fine for a 240 Hz display. In daily use i get around 5-8 hours so far (with Intel GPU only).

During basic users the coolers are almost silent. During day to day use (Development with VSCode / Jetbrains products, Docker, Surfing) it stays quiet too. You only notice the coolers, once you are compiling software, like an custom kerne or other packages (like from AUR).

I didn't notice any coil whine on my model. As there were some reviews complaining about it, you should definitely check for it once it arrives.

The CPU temperature stays below 50° degrees Celsius most of the time, even during normal use. Razer already undervolted the CPU and the CPU Cache by around -100 mV, so there is not much space left for more undervolting. As the temperatures are fine for me, I didn't bother undervolting more.

The Razer Blade runs rock-stable so far, didn't had any glitches and even with an uptime of almost 4 days in docked mode no issues showed up. With the out of the box Bios Version (1.0.5) there were no hardware detection / ACPI issues. Standby (S3) is working fine, same for lid close / open detection. For dock use you can disable standby on lid close in the systemd-logind configuration (/etc/systemd/logind.conf - set HandleLidSwitch to ignore).

Compared to the Lenovo ThinkPad P1 (i7-8850H), the Gigabyte Aorus (i7-9750H) and the MSI GS65 (i7-8750H) the Razer Blade 15 CPU is throttling less often so far. Especially the Lenovo and MSI throttled quite fast once you put some load on them. The Blade 15 is behaving way better here (even with undervolting on the other machines), didn't had any Kernel warning for overheating so far.

After testing a lot of notebooks during the last years, I was really surprised about the Razer Blade 15 Advanced CPU + GPU performance and stability. It's working without issues and stable with Arch Linux and Kernel 5.5.7 so far. If you are looking for a decent and modern Linux Notebook, you should take the Razer Blade 15 into account.